In which I develop a serious habit

La Taza coffeehouse is in close proximity to both my daughter's school and PVCC, where I have been taking classes during my long absence from writing about food. La Taza has amazing coffee, and I'm clinically addicted to the Cuban coffee con leche. One of the best breakfast bargains may also be found there: tiny taquitos with egg, green chile, and cheese. I usually get two. 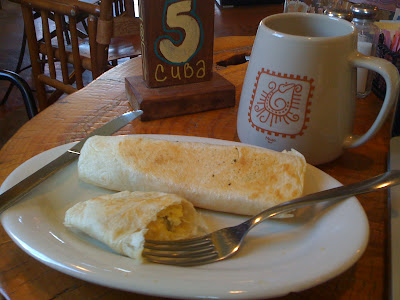 Posted by Adrienne at 5:44 PM No comments:

Email ThisBlogThis!Share to TwitterShare to FacebookShare to Pinterest
Labels: restaurants

In which we grill bread I love panzanella. This tomato-free version made use of last month's garden asparagus. The patch is still small, but fresh asparagus is infinitely better than anything you can buy. The parsley also came from the garden. The recipe was adapted from 101 Cookbooks blog--adapted in that I grilled the vegetables and bread in my cast iron grill pan. I used green garlic from the acres growing here, and I grilled it as well. The beans are cannellini, and the dressing is just lemon, lemon zest, champagne vinegar, and extra virgin olive oil.
Posted by Adrienne at 7:30 PM No comments:

In which we make pies 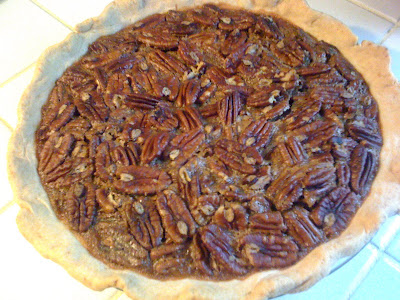 I haven't been getting much baking, or any type of cooking done lately. Such is the life of a student-mother with a new kitten. 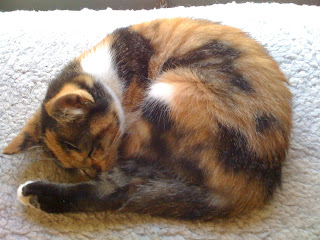 Recently, Carnivorous Husband and I celebrated our twelfth wedding anniversary at a quiet (kids were elsewhere) beach condo on Fripp Island, South Carolina. We had a lovely, spicy meal at a restaurant called Yes, Thai Indeed! And we walked around Beaufort for a while, blissfully uninterrupted in our conversation.
We stopped in a shop called Lulu Burgess, a favorite of my stepmother and a playful amalgamation of jewelry, rubber chickens, and cookbooks.
We picked up a book called Southern Pies by Nancy McDermott. Pictured above is one of the first pies I've made from it: pecan pie. Unfortunately, a lemon pie and an almond custard pie escaped photographing. The recipes are largely excellent, and I especially love that the pecan pie uses only brown sugar and no refined liquid sweeteners.
This anniversary get-away may be repeated for not just anniversaries but also half-anniversaries and even un-birthdays.
Posted by Adrienne at 8:26 AM No comments:

In which we eat toffee 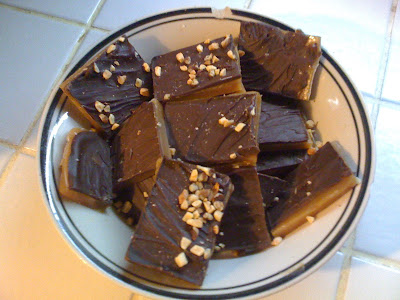 Carnivorous Husband spent a few hours helping a friend (Megan) to change a tire the other day. A few hours? Yep--the car in question will henceforth be known as "Cursed Car" should it make another appearance. I really hope it doesn't. It's given Megan far too much trouble as it is.
Megan opted to repay him in toffee. I have decided to call it "Karma Candy." At this writing, the karma has passed mostly to me. And it's the best toffee we've ever eaten. So, enjoy.

Method:
Cover a cookie sheet (with edges) with aluminum foil and grease thinly but entirely.

Combine the sugar, butter, salt and water in a large sauce pan and bring to a boil. Some use a candy thermometer; I never have. (If you do, you're aiming for 300-310 degrees Fahrenheit.) You'll need to stir it constantly to keep the caramelizing consistent throughout, while watching the deepening color carefully. There's a frustrating thin line between underdone and burnt, and you're looking for the color of caramel. I use the hard crack test to check if it's done, which simply means dripping a tiny bit of the molten toffee into a cup of cold water. If it forms hard, thin threads that break when bent, the toffee's done, and you should take it off the burner faster than you'd think is required. When it's done, it's less than than a half a minute away from burning. After removing it from heat, immediately add vanilla extract and stir it thoroughly. The toffee should be loudly protesting at this point, bubbling furiously.

Pour onto greased aluminum foil, spreading evenly. Leave it alone to cool, after which, store in the refrigerator to set.

If using a topping on the toffee, be sure to remove the toffee from the refrigerator for at least an hour so that the heated chocolate doesn't force the cold toffee to crack.

Melt the chocolate chips in a double boiler and spread evenly over the toffee. Garnish with walnuts and press down into the chocolate. Take a sharp knife and score the toffee with the point. Store in refrigerator. Once chocolate has set, the toffee should break cleanly along score marks. If it's crumbly, you didn't leave it on the burner long enough; if it's burnt, you'll taste it.
Posted by Adrienne at 8:14 AM No comments:

In which there is dressing

Even though the kids are not in school, and you might think that we're therefore immune to the tumult of the return of the "back to school" time of year, it has taken a toll on us as it always does. Meals have been simpler of late, and blog posts may be shorter for a while. Pictured is homemade blue cheese dressing, a fine dip for vegetables of all stripes. 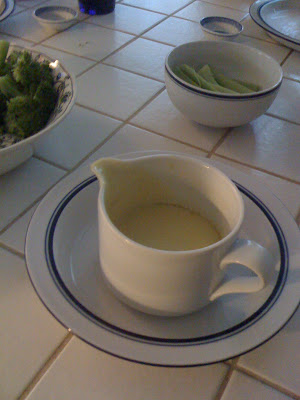 It's very simple to make, and I honestly don't remember discrete quantities, but you'll want to use much less vinegar than oil and as much cheese as suits you.
I love my little wand blender for dressings and creamy soups. They are very cheap, as kitchen gadgets go, and they make short work of all sorts of blending. I also like that they are easy to wash in the dishwasher (only wash the blender end this way, not the part with the cord), and they allow me to use fewer dishes.
The dressing includes only extra-virgin olive oil, blue cheese (your favorite), and vinegar. I'd stick with red wine or white balsamic or maybe champagne, because a traditional balsamic will be too sweet, and cider vinegar might convey the wrong flavor. But if you try it and like it, let me know.
I used a gorgonzola I found at the Cheese Shop in Stuart's Draft. I also happen to love Point Reyes Blue, stilton, and Great Hill Blue, should you be able to find those. I'd stay away from traditional Gorgonzola Dolce--save that for pizza and pasta. Something crumblier is better here.
We served the dressing with celery, steamed broccoli, carrots, cucumbers, and peppers. The summer produce won't be around much longer.
Posted by Adrienne at 1:39 PM 1 comment:

Email ThisBlogThis!Share to TwitterShare to FacebookShare to Pinterest
Labels: dressing

In which we enjoy summer 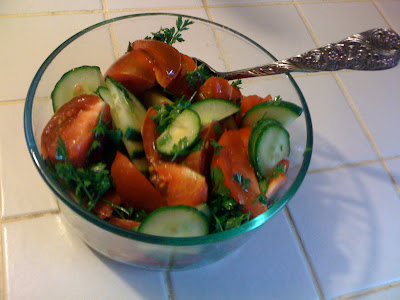 The markets are full of delicious tomatoes, and my parsley survived the summer. So we made salad with some English cucumbers, Maldon sea salt, and the Laudemio Italian extra virgin olive oil I get for Christmas from my father every year. It was simple, but it was so pretty I just had to share.
I finally got around to making granola. Carnivorous Husband will thank me, I'm sure. Actually, how he's managed to survive since the last batch ran out is a bit of a mystery. Here is how I go about it:
Mix 9 cups of rolled oats with about a total of 3 cups of unsalted nuts of various types. Today, I used almonds, pecans, and walnuts. In a smaller bowl, mix together 2/3 c canola or other light oil and a total of just over a cup of a mixture of maple syrup, barley malt syrup, and honey, or any of these that you have. There is no need for a special trip to the store. I also like to add a little almond extract and sometimes cinnamon. Add the wet ingredients to the dry and mix thoroughly. Spread the mixture on a couple of rimmed baking sheets lined with parchment. Roast at 350 degrees for about 30 minutes, checking to make sure that the grains are browning and making lovely, large crunchy chunks--but not going overboard. Cool, mix with the dried fruit of your choice (I used cranberries and golden Hunza raisins) and pack into jars such as this sensible, old-fashioned one my grandfather gave me. 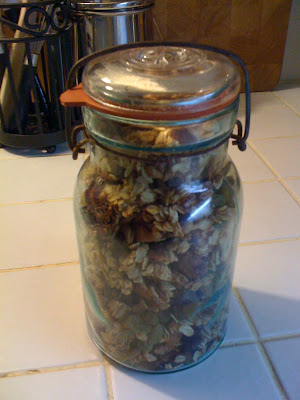 Posted by Adrienne at 9:52 PM No comments:

In which there are snacks 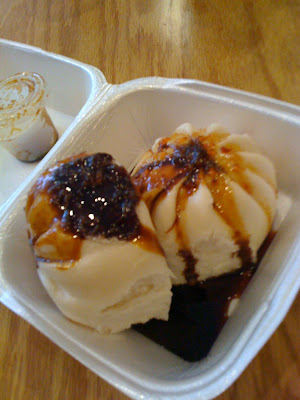 Carnivorous Husband and I decided to try the new frozen yogurt place on the Downtown Mall the other day. As unappetizing as the name "Sweet Frog" sounds to me, we'd heard that their not-too-sweet plain frozen yogurt should be sampled. But first, lunch.
Marco & Luca is one of our go-to lunch places if we're short on cash. It's not exactly a well-balanced meal, so we plan to eat a more nutritious dinner when we eat there. But it's fast and tasty. I'm not a huge fan of cold noodles, and I don't eat pork dumplings, so I generally get the "vegetable hot bun," a variation of traditional Chinese "bao," a word that also means "purse." The buns are steamed and filled with a mixture of napa cabbage, cellophane noodles and some other veggies. They also come with a sweet and spicy sauce. I do sometimes make these at home, and my father made a comfort-food, pork-filled variety, but Marco & Luca's are good when I have neither the time nor the inclination to make my own.
As for Sweet Frog, the tart yogurt was surprisingly good: I tire of overly-sweet desserts. It is apparently also fat-free and contains live cultures. It was very cold and became slightly icy in texture, probably due to the lack of fat and sugars. But it was good nonetheless, and I didn't feel like I'd swallowed a butterball after eating it or anticipate that my brain wouldn't be functioning for a while. After some dishes of ice cream, I need a lie-down.
I'm not a fan of self-serve bars of any kind, because of the germ factor, and their toppings are in such a case. They have the usual suspects as well as tropical fruits and an oddball topping of soft, opaque squares called "coconut jelly" or something similar. I tried one, and it wasn't my favorite.
The yogurts are in a vault-like dispensary. Everything was very clean: the floors, tables, counters, and dispensers. One spoon had fallen, handle and all, into the strawberries, but it was the place's only flaw. It was also affordable, and I do like that I can choose how much (or little) I want on a given visit. There are no set sizes, and price is determined by weight.
Posted by Adrienne at 8:53 AM No comments: